Music, art and getting by with a little help from friends merge on ‘The Lost and Found’

Roland Ramos' new album, "The Lost and Found," might seem like a simple affair: six tracks of soothing and beautiful melodies showcasing finger-picked guitar and voice.

But the recording represents much more: It's a testament and a thank-you to a community Ramos has nurtured, supported and helped build over the last 15 years.

When his cherished guitar was destroyed in a freak accident last May, Ramos turned to crowd-funding and asked friends and fans to donate and pay for a replacement.

"I was terrified," Ramos said. "I had to compete with a pandemic! I had to reach out to people who were scared and not leaving their house. People losing their jobs. And I was complaining that I broke my guitar. It was frightening to ask and I was shocked at the response."

"It turns out that there are a lot of people that my music helped through these crazy times," Ramos said. "I was reminded of that often. That's what people would tell me when they donated. 'You helped me in the past and any way I can help you, I'm happy to do.' It was a refrain I heard often, and I was really humbled by it."

The response was uplifting, but hardly surprising.

Ramos has been giving to the Hudson and Brooklyn music scenes for nearly two decades. When he lived on Jackson Street in Hoboken, he transformed an empty lot into a sculpture garden and a vacant apartment into an art gallery. He curated music and art festivals at the Monroe Center, and he's helped local artists hang their works in music venues, restaurants and galleries. 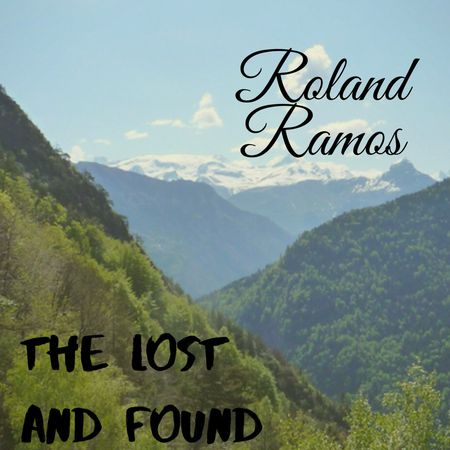 Roland Ramos -- who's been nurturing and contributing to the music and arts communities in Hoboken, Jersey City and Brooklyn for years -- has released a new album, "The Lost and Found.''

For the last few years, his passion has been his video podcast, "Artifications," which explores the art scenes of communities around the country and the world. As part of the nexus between music and art, he and Diana Lovrin toured as a musical duo and in his off time, Ramos visited some of the most impressive museums in Europe along with small galleries.

"We raised funds to finance that tour last year and it went really, really well," he said. "But then we came back and the pandemic drove everything crazy. So I took the opportunity to recreate the album I did in 2018 because, if you remember, that album was originally recorded on video, outdoors in the parks, in the streets, live while filming. It never sounded as good as I wanted so I took those songs into the studio -- to a controlled environment where I could get the sounds the way I wanted them. And, of course, I used the specific guitar I was able to buy with those donations. I needed to fulfill my obligation to produce an album with it and deliver it for free to everyone who supported me."

"The question I always ask is, how are you doing?" Ramos said. "How are you surviving? How are you continuing to work? What support are you getting from your communities. I go to the blue-chip galleries and the street level galleries, and I explore art districts."

While those episodes of "Artifications" are being edited, Ramos has continued to create.

"I am doing a residency in Paterson at the moment with Alex Pergament ... from 660 Grand St. Art Loft in Jersey City, which lost its space to commercial development," he said. "They have basically created a new 660 in Paterson. My residency involves creating and specifically recording, music and poetry. I just finished completed 15 pieces of music. Another Jersey City artist/musician I am working with is Michael DiFeo on creating album art for it. I am returning in two weeks creating in-house videos for each of the songs."

He's also been doing a bit of soul-searching.

"Fear is a veil," Ramos said. "The real revelation comes from facing the fear and pushing back that veil and asking for help when you need it. If I hadn't been able to do that, I would have missed out on all these great, great things that came as a result. Having authentic connections during a time when you can't even shake hands is hard to find."

But that, Ramos suggested, is what music and art are for.

"The Lost and Found" is available at rolandramosvienna.bandcamp.com and rolandramos.com. "Artifications" can be heard free on iTunes, Apple Music, Stitcher and other streaming platforms.

Note to readers: if you purchase something through one of our affiliate links we may earn a commission.