Entitled "Pride is a Protest," the project is a collection of 36 black-and-white posters featuring 18 different people, places, and protests that are significant to queer history.

Like the name of the project, the black-and-white aesthetic of the posters act as a "protest" that rejects the notion of "rainbow capitalism" and brings back the roots of Pride as an act of resistance, rebellion, and radical self-expression, according to Win Mixter, a queer artist and illustrator who specializes in freelance graphic design.

Mixter is the second artist in the 2020 "Art on Market Street" poster series under the San Francisco Arts Commission (SFAC) to have posters installed on Muni bus kiosks along Market Street between the Embarcadero and Civic Center until August 31.

"Pride has evolved into something much different from the first Pride in 1970 that was meant to show solidarity with the Stonewall Riots and a continued spirit of rebellion against police harassment," said Mixter. "The earliest Prides were about standing up for one's rights, interrupting the daily life for the rest of the city, and expressing your true self in public, which is why I wanted to use this project to recenter the narrative to Pride's true meaning." 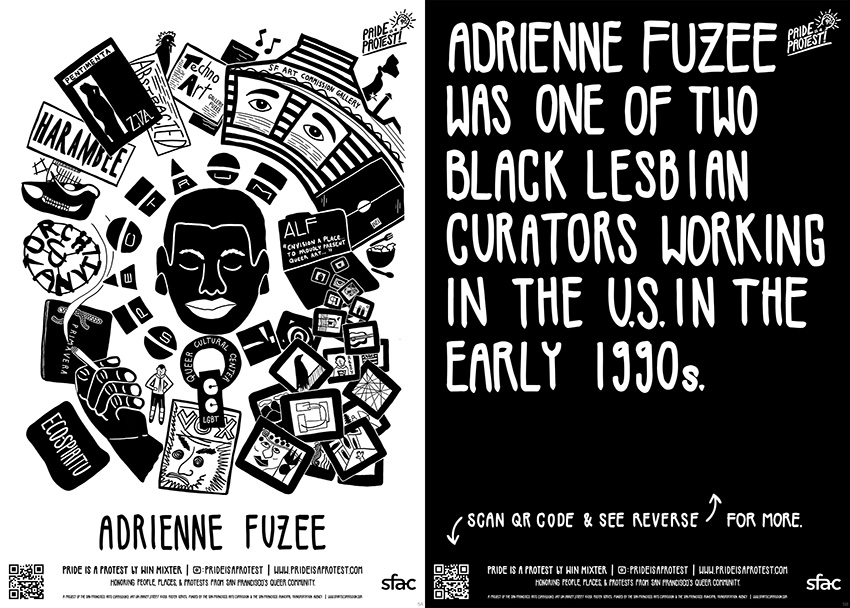 With "Celebrating 50 Years of Gay Pride" as the this year's theme of the "Art on Market Street" poster series, the ideas behind Mixter's posters were based on research at the GLBT Historical Society Archives, where he has been a long-time volunteer.

Mixter made sure that the subjects he chose to feature were representative of as many different types of people, subcultures, and sub-communities within the LGBTQ+ community that made San Francisco the global epicenter of queer life.

Mixter not only chose to showcase diverse stories of queer history, but also lesser known ones. His collection includes a deaf, queer, trans, Chicano, contemporary activist, Drago Renteria and one of the two Black lesbian curators working in the US in the 1990s, Adrienne Fuzee, among many others.

"I hope that those who view the posters see some of themselves represented in the work," said Mixter, "I wanted to showcase a lot of queer stories that maybe aren't as well known, and wanted to show a variety of queerness and what that can mean in San Francisco and beyond."

Each poster is designed in a circular layout with iconography representative of the subjects Mixter has chosen. For example, the poster of Lou Sullivan, a trans historian, activist, writer, and founding member of the GLBT Historical Society in 1985, features an image of his face as well as iconographies like a radio transistor and a journal that evoke the spirit of his personality.

Mixter's project not only memorializes his subjects, but also acts as a socially-distant "city as a museum." Each poster is located in a place relative to a piece of history that has happened there. For example, the poster of José Julio Sarria is located at a kiosk at the beginning of Market Street adjacent to 90 Market, which was the location of Sarria's short-lived bar, The Talk of the Town.

"The idea of it was to allow people to feel the history around them as they witness the posters." said Mixter. 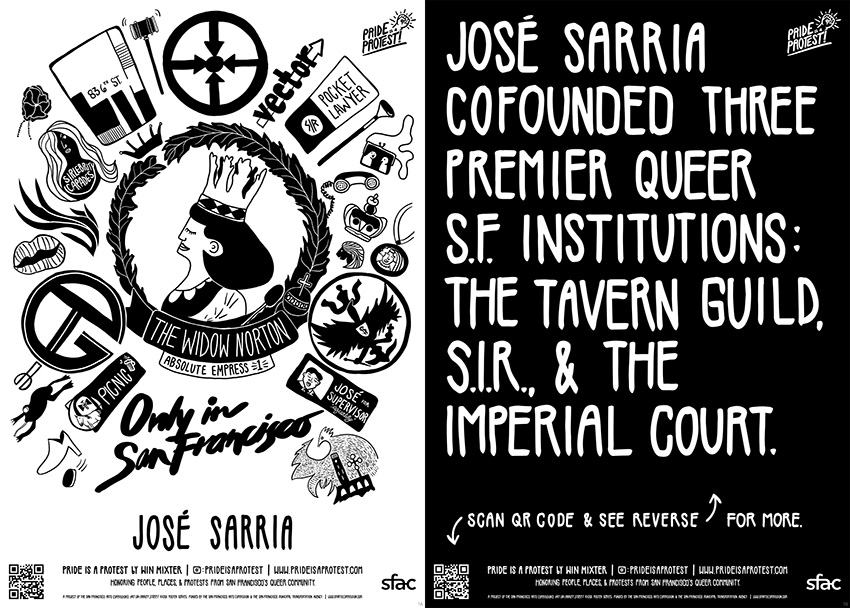 People can experience the posters casually while waiting for the bus or walking around the city. For those interested in touring all of the posters, Mixter recommends starting on one end of Market and renting city bikes to ride down the entire street and view all 18 posters.

Additionally, he recommends viewers scan the QR code in the lower left-hand corner of each poster. It takes viewers to the "Pride is a Protest" website, where they can learn more about each subject featured, view the full list of posters, and view a map of where they are located.

The project is also featured on Instagram @PrideIsAProtest, a handle that Mixter hopes to turn into a social and racial justice platform beyond the project.

"What I hope people take away from this project is that Pride is not just about having the same rights as straight people," said Mixter, "it's about celebrating our history, recognizing intersectionality in our community, and truly being yourself‒whatever that may mean to you."