Sword Art Online seems like a natural fit for a video game adaptation. After all, the source material revolves around in-universe video games already. Mechanics like leveling, health, and skill points are already built into the world and the stories. Adapting the series to the medium it's inspired by shouldn't be too difficult. But the results are a mixed bag.

Mechanically, Alicization Lycaris is a pretty solid JRPG. The combat system revolves around your party, which consist of series protagonist Kurito, and a rotating cast of up to three supporting characters at a time. Each of the characters have different skills, proficiencies, and abilities. Balancing the different members of your party, and taking advantage of their different skills and weaknesses, is central to the combat system.

"Adapting Sword Art Online series to the medium it's inspired by shouldn't be too difficult. But the results are a mixed bag."

The mechanics here are pretty deep. Each character has a base type; Attack, Defense, or Buffer. These types determine some of their base stats and abilities. From there, you can unlock new weapons and armor pieces to equip them with, as well as a large perk tree. From this tree, you can learn different types of abilities that can be applied to your party members. Some of these are passive buffs, while others are special actions that can be triggered in combat. There's a tree for each of the three character types, but perks can be applied to anyone. You can apply defensive perks to an attack-oriented character, for example. And once perks are unlocked, they're available for all characters.

The combat itself is fairly straightforward, but once you get the hang of it it's pretty fun. At its core, it's all about using weaker attacks to charge up your special moves and making careful use of your abilities. Your main attacks don't do much damage, but they charge up a skill meter that allows you to unleash more powerful attacks. Those attacks can be chained together, and augmented with skills and abilities to make them even more powerful. And you can switch between the different members of your party to trigger specific attacks and abilities. It's not terribly complex, but it requires just enough strategy to keep you on your toes. The different characters feel distinct enough to be interesting without requiring you to relearn mechanics. There's also a magic system, called System Arts, that comes into play later. These are smaller abilities that range from damage deflection to ranged attacks.

The combat is the core of the gameplay experience, but it's not all this game has going for it. The fighting takes place in a large and vibrant world, full of things to do. The game is open world, for the most part. You travel between different large zones, each of which is filled with NPCs, materials to gather, monsters to kill, and side-quests to complete. The world design is one of the places where this game excels the best. On a technical level, the graphics actually aren't all that impressive, but the vibrant color palette and interesting art direction make the world a joy to look at regardless. Some of the environments are genuinely breathtaking, and the monster designs are interesting and diverse. The music is top-notch as well, and does a great job of setting the different moods throughout the experience. 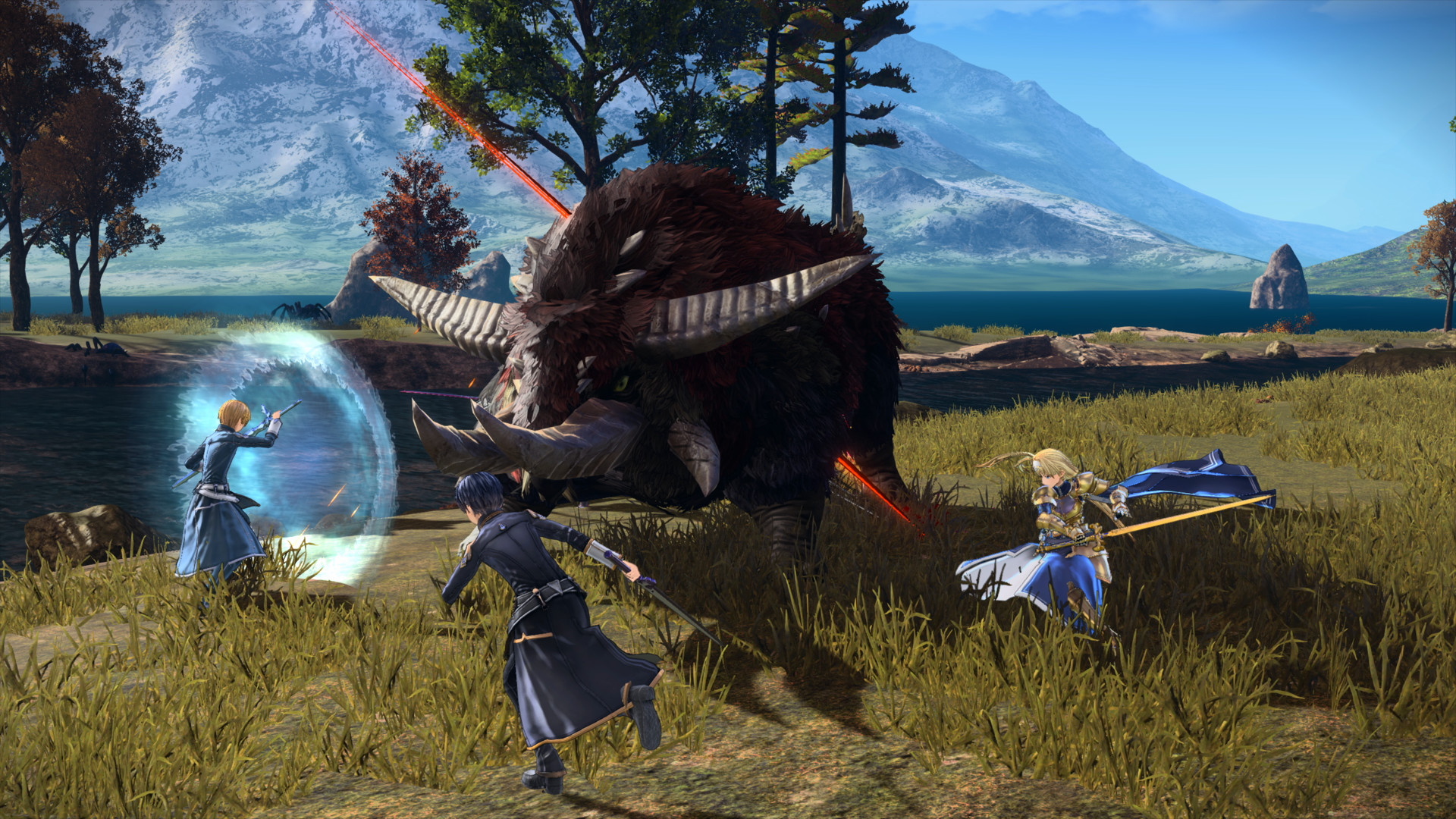 "The world design is one of the places where this game excels the best. On a technical level, the graphics actually aren't all that impressive, but the vibrant color palette and interesting art direction make the world a joy to look at regardless."

This is all wrapped around a pretty solid story, revolving around the mystery of Kirito's sudden appearance in an unfamiliar world, and the disappearance of a girl named Alice. The story is long, really long in fact, but is interesting enough to help carry the game along. Some of the dialog can feel stiff at times, a result of translation between the native Japanese and the English localization. But for the most part, the writing is solid, and the characters are compelling. There's a lot of drama that goes on, and sometimes it can feel a little over the top. But the game also has some surprisingly grounded emotional moments, and some genuinely cool plot developments. It's a long story, but one worth experiencing.

I said worth experiencing, and I meant it. But it comes with some pretty serious caveats. There's a great experience here, but it's buried under some strange, and at times downright poor, design. A lot of things just don't make a whole lot of sense. On their own, none of these issues are all that bad, but taken together they make things a lot less enjoyable than they could be. For example, early on in the game, the plot is told mostly through fully animated cutscenes, with only occasional dialog windows. But maybe five or so hours in, the game suddenly switches to delivering its dialog through still images of the characters with text boxes below them. There's no explanation for the change, and on occasion the game will give you a fully animated cutscene again. But far too many pivotal plot points are told through still images and text boxes. There's nothing more exciting than listening to a high-octane swordfight with a picture of the combatants sitting still on the scre en.

And speaking of the story, while it is a compelling one, the game places far too much emphasis on it, at the expense of actual gameplay. Far too often, you'll take control of a character so you can walk about a hundred feet, and then click through ten minutes of dialog, so that you can turn around and do it again. You'll sometimes find yourself clicking through half an hour of dialog boxes before the game takes you back to the overworld to fight monsters for ten minutes, only to return to another half an hour of dialog boxes afterwards. This problem is most pronounced early on, when the game has a lot of exposition and worldbuilding to deliver. But because of the length of the game early on doesn't mean the first hour or two, or even the first five hours. In fact, the first hour or two doesn't really suffer this problem. But about two hours in, the plot really gets going, and the gameplay grinds to a halt for about the next ten hours of the experience. It's a good plot, don't get me wrong. But when I have to click through thirty minutes of dialog for ten minutes of gameplay, it starts to feel less like an open world JRPG, and more like a visual novel. 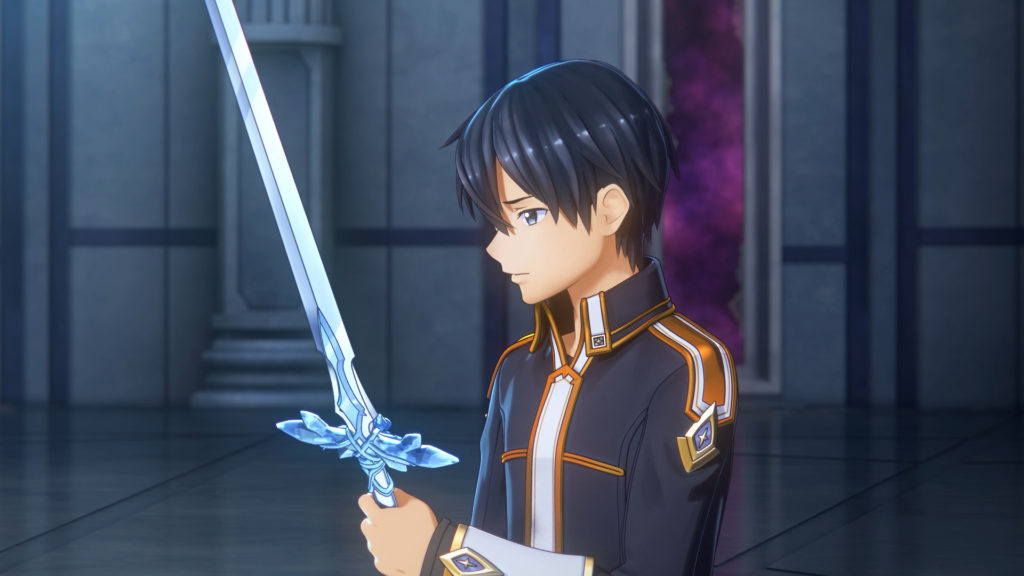 "There's a great experience here, but it's buried under some strange, and at times downright poor, design. A lot of things just don't make a whole lot of sense. On their own, none of these issues are all that bad, but taken together they make things a lot less enjoyable than they could be."

There's other issues that result from this emphasis on exposition. At some points, fast travel will be disabled without warning, and you won't be allowed to travel between different parts of the map. This can prevent you from completing previous side quests until much, much later, and it results in a game that, while technically open world, feels awfully linear at times. And the side quests are strangely designed. They flip-flop between really easy and absurdly difficult, and often times they feel unnecessary.

There's a good game hiding inside SAO. The story is great, the world is beautiful, and when the game actually lets you experience it, the combat system is fluid and engaging. But it's buried behind strange design, long-winded dialog trees, and arbitrary limitations that hold the experience down. If you can overlook these strange choices, you'll be rewarded with a fun experience. But it's not for everyone, and the bizarre choices may scare off some players.

This game was reviewed on the PlayStation 4.

Longwinded exposition results in too little gameplay; Strange limitations make the game feel more linear than it actually is.

Sword Art Online: Alicization Lycaris offers a compelling experience, but only forgiving players will ever get to fully enjoy it. Others may be frustrated by its strange design flaws.

A copy of this game was provided by developer/publisher for review purposes. Click here to know more about our Reviews Policy.