The emerging artist Filippo Citterio also know as BARTEU is presenting a selection of his abstract paintings in his first 3D exhibition which can be explored until 21 August this year from his website. After careful selection, viewers will be able to walk through the virtual space and discover his style which is born from a unique technique that juxtaposes action painting and Flair Bartending. 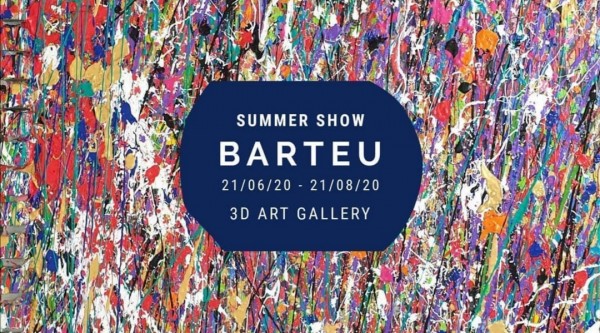 Citterio combines the art of painting with his experience as a bartender, a profession to which he devoted himself for 10 years in the Navigli area, a very touristic zone. His curious process consists of placing the acrylics in a bottle and through rapid and intense movements, capturing the colors on the painting, which requires great skill. This leads him to create a canvas that unfolds within a fixed frame like the static edge of a painting. As a result, the final result of each work is always different and unpredictable so that each one is unique and unrepeatable.

We could also consider his art as a convergence between painting and the spirit of the urban world. Citterio introduces into his creative process a technique belonging to another universe, linked to nighttime experiences in crowded centers. But in addition, in some of his works, he includes the use of stencil, generally associated with street art, to represent different figures. Vivid colors are also a personal stamp and are characterized by the luminosity they generate. All these elements invite people to take a moment and contemplate the vibrant and fascinating composition in the midst of the visual turmoil in which we are immersed daily.

Each painting is a way of capturing the instant of intense action by the artist. Although his body is not explicitly visible, the trace of physical movement is permanently exposed in the work. In this way, Citterio expresses himself through the pictorial plane, the gesture, and the corporal expression reflecting the dynamism of his personality. In his works, the materiality of the painting as a surface and the formal elements are also enhanced. The energetic and gestural character of his style can be related to the abstract expressionism of the movement of Jackson Pollock and Shozo Shimamoto and even to the body paintings of Yves Klein, both as reference points within abstract and action painting.

The artist has transformed his practice as a bartender into this innovative technique that serves as a breath of fresh air within contemporary practices. He appealed to experimental creativity and found a way to manifest his freedom and the spontaneity of creation. The production process is then conceived as a performative act in which painting is the documentary proof of it and the work of art at the same time. Today he is the only one who uses this technique for artistic representation.

Filippo Citterio (b. 1987) based in Paris, was born and raised in the city of Milan, Italy, where he worked as a bartender. Due to his ability to mix easily with people, he has become familiar with various figures in the art world. From an early age, he has been attracted to urban culture, particularly to street art and hip hop. In 2017, Citterio moved to a small village in the French countryside near Paris to continue his career as a bartender. This has allowed him to have enough space to carry out his work.  Citterio prefers not to be pigeonholed into a single style so he prefers to call himself a versatile creator and designer capable of adapting to people's desires but with new and innovative ideas.