For artist Panca, ‘art is my salvation’

Cross-border artist Paola Villaseñor is grateful for her comfortable Tijuana home where she has been sheltering during the coronavirus pandemic. But she has also been feeling a bit guilty about it because so many of the city's poor don't have anywhere to go.

For the artist, those conflicting emotions collide into creativity.

"I'm trying to channel those things and make art," said Villaseñor, who goes by the name Panca. "Art is my salvation right now."

Since the pandemic started, Villaseñor has created a claymation short on the importance of social distancing and hand washing in collaboration with filmmaker Giancarlo Ruiz. She is also getting ready to paint a mural in her home, live streaming pieces of processes. And to channel her frustration and anger, Villaseñor said, she is "diving into a political piece."

The artist, who grew up in Chula Vista and has been living in Tijuana for 15 years, was planning on a busy year, starting with "I am the Architect of My Own Misfortune," a solo show at Bread & Salt, which opened Feb. 8. For a frenzied month before the opening, Villaseñor created almost everything for the show at one of Bread & Salt's studios.

The show is currently "frozen in time," Villaseñor said with the closing of the gallery. In the meantime, Bread & Salt is taking preorders for Villaseñor's first book, "Los Perdidos," a compilation of drawings, sketches and the reworked snapshots. She was drawn to the thrift-shop photos, wondering how they ended up there. At first, she wasn't sure about sketching on them, but then decided it would give them a new life. 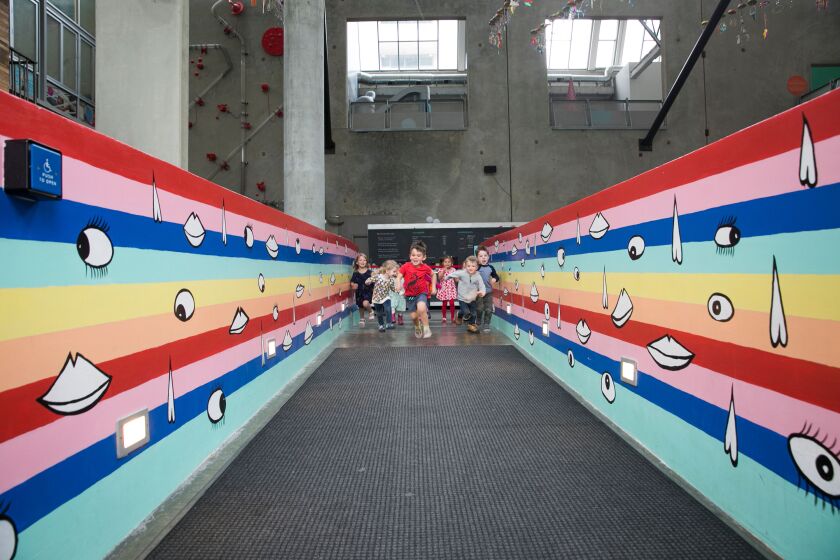 Villaseñor has also been spending stay-at-home time creating virtual mass creativity workshops in partnership with community centers around the county. It's part of her residency program at the New Children's Museum that includes plans for a 1,200-square-foot installation at the bottom of the entry bridge. The mural on the bridge was painted by Villaseñor in 2018. Named "Smile," the colorful, 48-foot-long artwork is a collection eyes and mouths and what can be interpreted as noses or hearts. Her new project will also include a mural and will take into consideration whether people will want to touch and climb.

Villaseñor found her creative footing as a street artist in Tijuana. Music and nightlife originally drew her to the border city from her sheltered home in Eastlake. After her mother died from cancer in 2005 and the family home became unaffordable, Villaseñor moved to Tijuana permanently.

"Tijuana started to feel more like home because of the people. My friends supported me," she said.

Her idea for turning Tijuana into her canvas came from a visit to New York and seeing all the street art there.

"I thought, I know where all the walls are (in Tijuana.) I had it all mapped out in my head," Villaseñor said. "I started doing my own art with wheat paste."

She calls her art visceral, "somewhere between surreal and pop," inspired by the mundane, focusing on dichotomy, feminism and decay of humanity.

"I go in my head a lot," she said, translating relationships, nostalgic things, frustration and even things she hasn't figured out yet into art. The pain of losing her mother was channeled into body art. She now has about two dozen tattoos.

Her street art won her recognition from city art tours, as well as her friends and acquaintances. Bar owners she knew started commissioning work. But eventually Tijuana's gangs of graffiti artists weren't so happy she was homing in on their scene.

"Tijuana was really dangerous at the time," Villaseñor said. "It got to the point a person was stalking me, and my murals were covered up. I had to analyze a lot of things. Am I going to fight with these guys or evolve as an artist?"

She decided to reshape her work, become more serious as an artist and contact museums. She is now a recognized border artist, but her work hasn't been without controversy.

Her 2015 mural "The Savagery of Women" painted on multiple walls at the entrance of the San Diego Art Institute drew criticism for depicting violence by women, not against women. With blood, body parts, a disembodied head and cannibalistic women, Villaseñor wanted to refute the concept of women being pure and gentle.

"We can be just visceral, just as raw. We can be savage," she said. "I wanted to represent that."

And the large-scale mural on the outside wall of Bread & Salt in Barrio Logan, completed in 2017, also raised a few eyebrows. Some thought the 45-foot-tall ice cream cone with facial features surrounded by hearts was out of place, and the mural should have reflected Villaseñor's Mexican heritage. But she didn't want to pigeonholed.

"I don't feel like painting like Frida Kahlo. I don't want to be defined as Chicano," Villaseñor said.

"My inspiration comes from everyday life," she said. And during this time of self-isolation, she feels a responsibility as an artist to show people that there are outlets for whatever they are feeling. "That has been my lifeline." 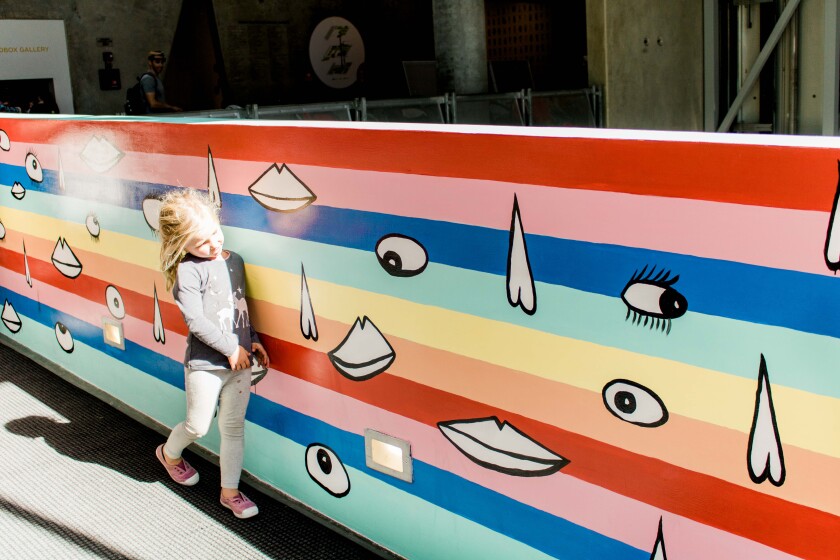 "Smile," by the artist Panca.