Art is a form of protest.

It's a way of expressing feelings of solidarity and outrage, of hope and pain as the country and Wisconsin continue to grapple with the death of George Floyd and so many other people of color at the hands, and knees, of law enforcement.

On Sunday, local artists joined to create a "Muslims for Black Lives" mural at East North Avenue and North Holton Street, part of a series of murals across Milwaukee supporting protests for racial justice.

Fanana Banana, a Milwaukee Muslim art collective, organized the mural-making event on social media. Co-founders Amal Azzam and Nayfa Naji coordinated with local artists to plan the muralâ€™s design. Front and center, the artists used paint to draw pictures of many children of different races and backgrounds alongside the words: â€œOur kids will not be next.â€ 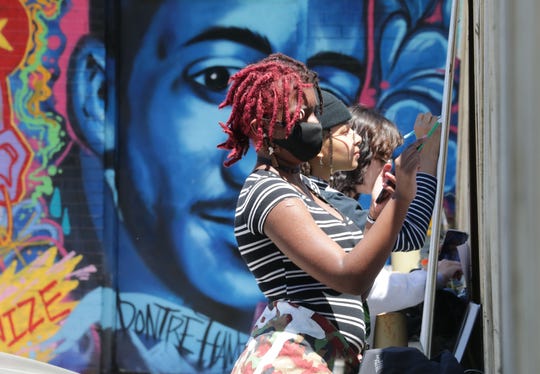 Aminah Green, left, works with others on a collective mural for Black Lives Matter near the corner of East North Avenue and North Holton Street in Milwaukee on Sunday. The event, organized by the Muslims for Black Lives Mural group, Fanana Banana, involved people painting large panels to be attached to the fence with various Black Lives Matter messages and the words "Our Kids Will Not Be Next," in response to to the death of George Floyd, who died after a Minneapolis police officer kneeled on his neck for more than eight minutes. (Photo: Mike De Sisti / Milwaukee Journal Sentinel)

Aminah Green, a 19-year-old art student at UW-Milwaukee, worked on a portrait of James Baldwin.

Alongside Green, Olivia Vazquez, a 19-year-old art student, worked on a portrait of Shukri Abdi, a 12-year-old refugee from Kenya who drowned in England last year, and writer and feminist Audre Lorde, who died in 1992. Vazquez said she believes the murals will be a positive addition to the community.

â€œI think seeing all these faces and figures super big blown up in the city gives a voice not only to them but everybody else in the community,â€ Vazquez said.

Mario Hamilton works on the outline of a Malcolm X face on a collective mural for Black Lives Matter near the corner of East North Avenue and North Holton Street in Milwaukee on Sunday. (Photo: Mike De Sisti / Milwaukee Journal Sentinel)

Azzam said she hopes the large canvases will convey a message of unity in a city thatâ€™s long been divided by segregation. Naji added that she hopes the recent protests and movement against racism will bring about change.

Racial injustice is â€œheartbreaking because itâ€™s not something anybody can go through,â€ Naji said. â€œStanding for justice and wanting change for that â€" itâ€™s a big deal.â€

Protesters turn out in Waukesha

In the city of Waukesha, about 80 people took to the streets to protest racism in the criminal justice system.

â€œWe saw a really strong showing in protests in Waukesha before and I want to keep that going,â€ said Ben Strong, who organized the protests and plans to organize a weekly Waukesha protest until more changes are made in the criminal justice system. 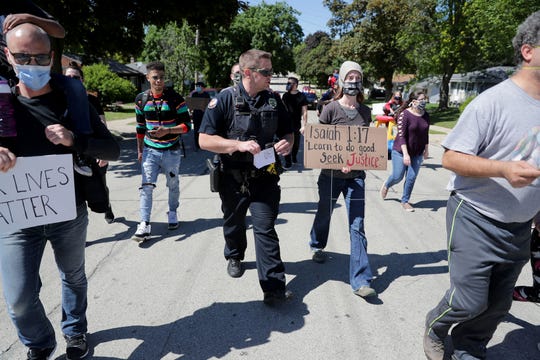 Waukesha police Lt. Chad Pergande, who voluntarily joined the group after they stopped at the Waukesha Police Department, talks with Cari Jacobs of Milwaukee during a march in protest of police brutality in Waukesha on Sunday. (Photo: Mike De Sisti / Milwaukee Journal Sentinel)

Protesters walked around from City Hall to the Police Department, where they knelt for nine minutes to honor Floyd.

Then Strong asked police officers to march back to City Hall with them.

â€œI ask you to march with us to show that you value the members of your community more than the system that suppresses them,â€ Strong said.

One officer, Lt. Chad Pergande, decided to walk with them. 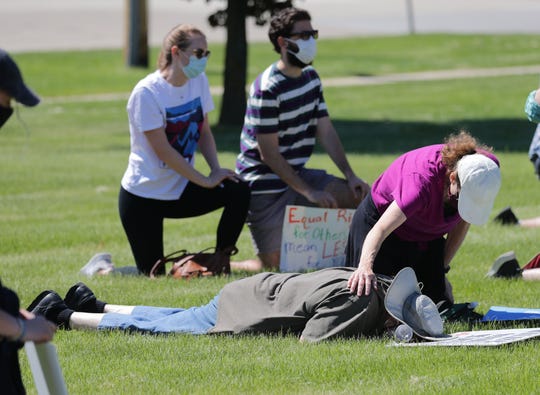 â€œIt just really hit me how scared he must have been,â€ said Heleene Green, lower, of Mukwonago, overcome with emotion as sheâ€™s consoled by her friend, Rachel Patton of Milwaukee ï¿¼after protesters kneel for nine minutes, reflecting the time George Floyd was held down by a Minnesota police officerâ€™s knee, leading to Floydâ€™s death. The group was outside the Waukesha Police Department. (Photo: Mike De Sisti / Milwaukee Journal Sentinel)

Pergande refused an interview but told protesters as he walked with them that the Police Department tries to eradicate racism by hiring the right people and providing bias training.

Helen Boudry marched with her dad.

â€œI think itâ€™s important to show that this isnâ€™t just an issue in cities, itâ€™s an issue in all of America,â€ Boudry said. â€œEven though we're in a small town like Waukesha, the cause can still spread and our voice can still be heard.â€

Also Sunday, Port Washington police said they are investigating an incident in which a man in a car told female protesters he hoped they would be sexually assaulted. The incident on Friday was captured on a cellphone video.

The group of female protesters was one of many around the nation protesting racism and police brutality after Floyd's death in Minneapolis.

Port Washington police said they would refer portions of the investigation to the city attorney.

â€œItâ€™s important to note that neither the Port Washington Police Department nor the residents of the community condone the actions of the motorist,â€ Port Washington police said in a news release. â€œThe motorist has since apologized and regrets his actions."

Our subscribers make this reporting possible. Please consider supporting local journalism by subscribing to the Journal Sentinel at jsonline.com/deal.